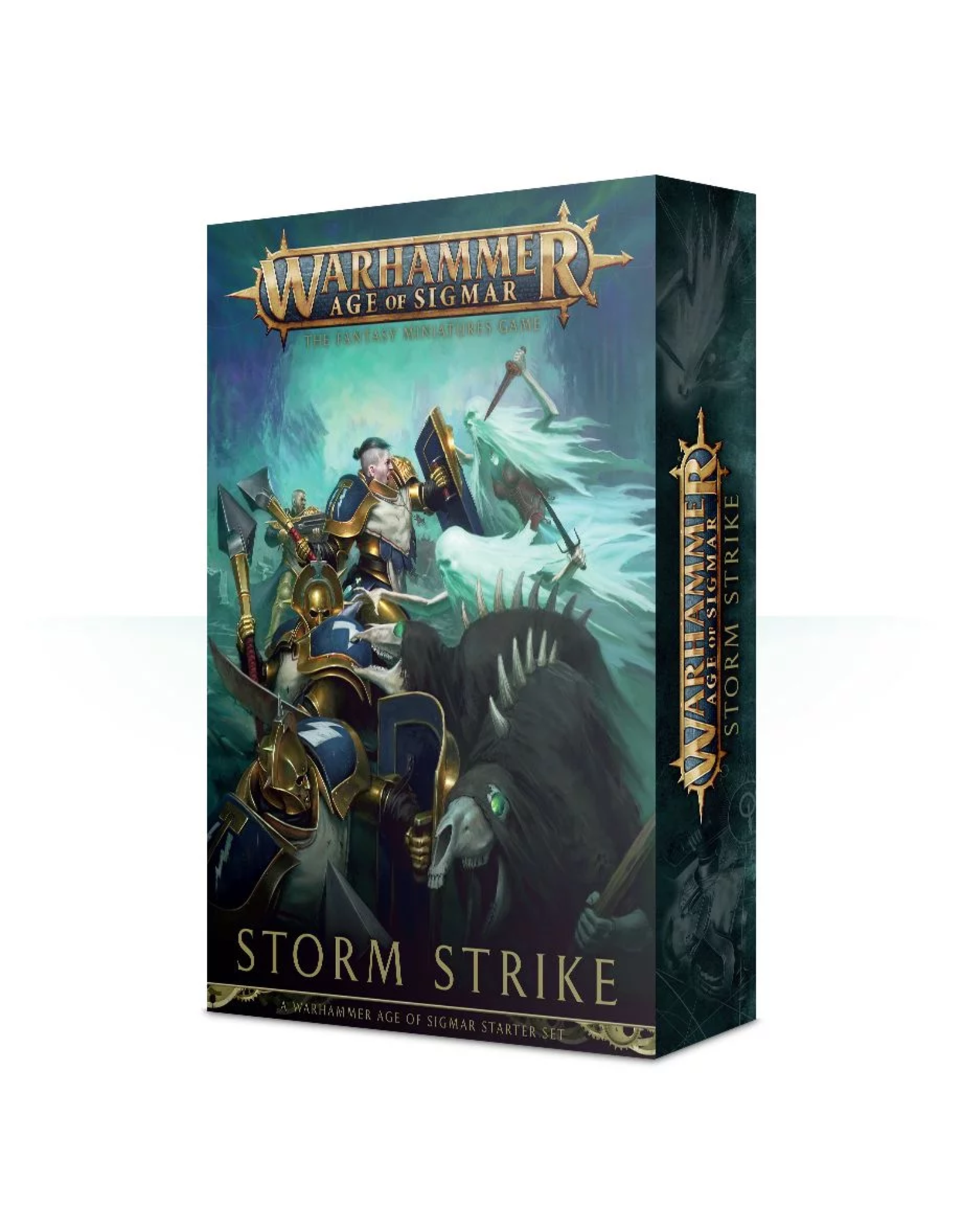 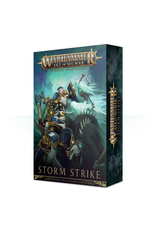 Ancient skeletons and mouldering corpses crawl from their barrows, called forth by the dark sorcery of Nagash, Supreme Lord of the Undead. Ancient beyond reckoning, cruel and infinitely calculating, Nagash seeks to remake the Mortal Realms in his own image, transforming them into an ordered empire of mindless thralls, leashed to his will. In opposition, thunder rolls as the Stormcast Eternals, heavenly champions of order, rage forth to meet this threat head-on in epic clashes to decide the fate of the world, This is a new epoch, a time of mighty battles and unending war, a time of heroes and monsters. This is the Age of Sigmar!

Ideal for those new to Warhammer Age of Sigmar, and the wider hobby of collecting, building, painting and playing with Citadel miniatures, Storm Strike is a starter set containing 15 push-fit miniatures split across the factions of the heroic Stormcast Eternals and ghastly, undead Nighthaunt – mortal enemies locked in unending combat – along with detailed guides on assembling, painting and playing with them. Included:

15 push-fit miniatures, which can be assembled without glue and are even supplied on pre-coloured plastic:

The glorious forces of Sigmar, pure and unbowed warriors dedicated to scouring the Mortal Realms of Chaos, Destruction and Death. Each of the Stormcast Eternals miniatures in the box is an Easy to Build push-fit model, supplied on gold plastic sprues and requiring no glue to assemble:

- 3 Castigators and a loyal Gryph-hound – support troops who lay down withering ranged attacks with their thunderhead greatbows;
- 3 Sequitors – frontline infantry who bring the fight to the fore with stormsmite mauls and soulshields – their leader, the Sequitor-Prime, carries a spirit flask.

Nagash’s seemingly-endless hordes of risen undead, bitter and lethal toward all who still possess the gift of life. Each of the Nighthaunt miniatures in the box is an Easy to Build push-fit model, supplied on turquoise plastic sprues and requiring no glue to assemble:

- 4 Glaivewraith Stalkers: unstoppable gheists drifting inexorably towards their prey, each attacks with a 2-handed hunter’s glaive;
- 4 Myrmourn Banshees: hollow and horrifying, they drift and swoop weightlessly clutching their chill daggers.