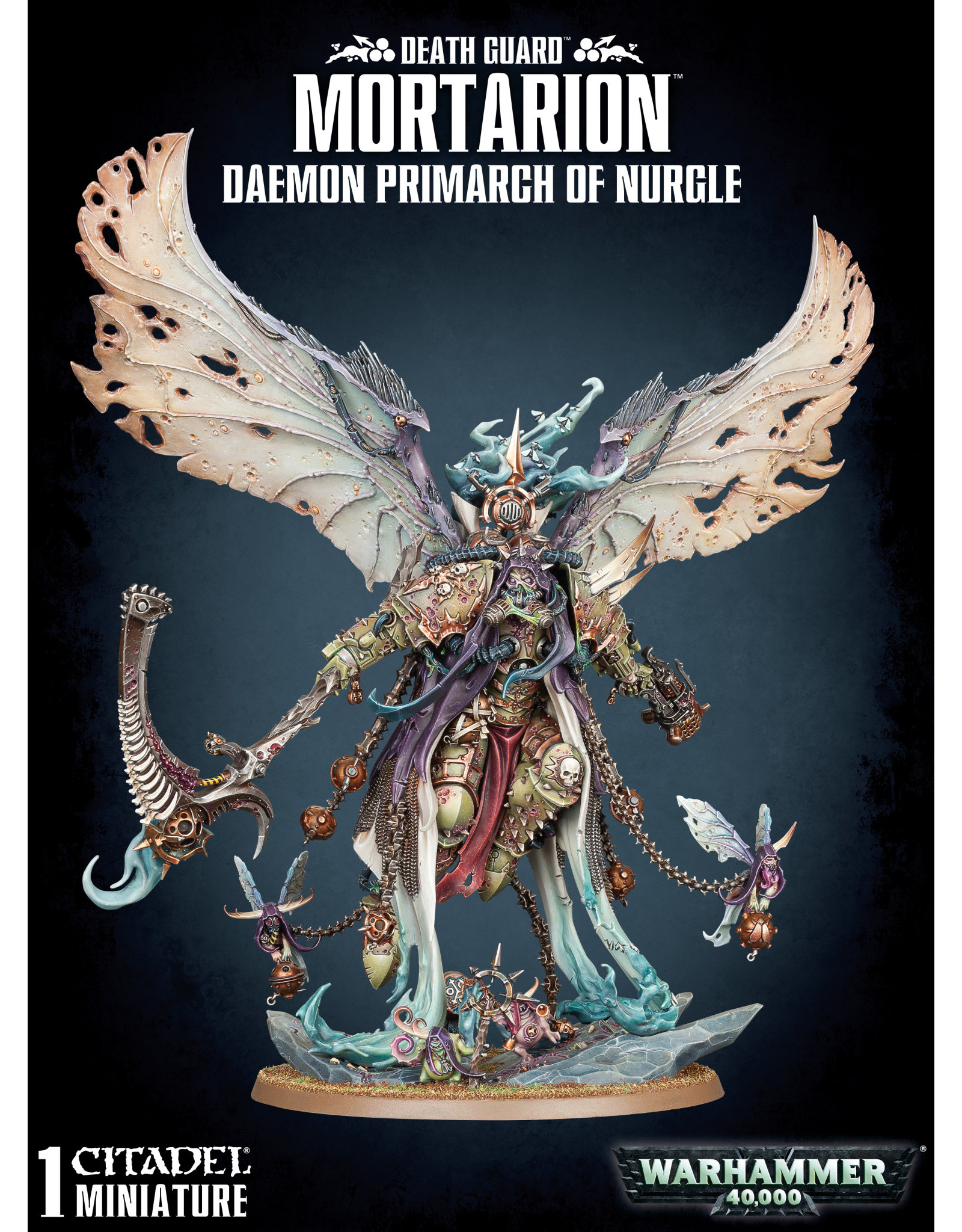 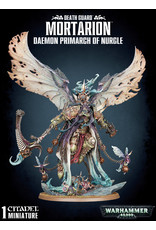 For ten thousand years Mortarion, Lord of the Death Guard, has crushed his enemies upon the field of battle. Surrounded by chittering Daemon mites, droning flies and noxious plague vapours, Mortarion swoops into battle on vast, creaking wings. the thudding beat of these foul pinions fills the enemy with crawling dread, even as they waft the reek of death across their lines. To even stand in the presence of the Death Lord is lethal, opponents choking and collapsing as they succumb to the myriad plagues that churn the air around him.

This multi-part plastic kit contains the components necessary to assemble Mortarion, Daemon Primarch of Nurgle. This is a towering model – the word ‘miniature’ barely does it justice, as he looms over the rest of the Death Guard and gives even Bloodthirsters something to look up to! He is clad in baroque power armour known as the Barbaran Plate – this is covered in rust and rot, with skulls, spikes and Nurgle symbolism on each of the chunky components. Mouldering robes, chains and a rotten cowl hang from this armour, partially covering the system of pipes that feed his breathing apparatus – it is safe to assume that this ventilator isn’t delivering fresh and clean air to Mortarion, rather vile spores and disease.

He is armed with 2 foul weapons: a massive scythe named Silence, a rusting yet razor-sharp blade featuring brutal chain-teeth, stained with the blood of worlds and capable even of hacking a Reaver Titan to pieces; and The Lantern, an ancient energy pistol. There are two modelling options for these weapons – one option features the weapons down by Mortarion’s side, the other features a much more aggressive pose.

Mortarion features huge, decaying wings – these are modelled with pockmarks, holes and tears, representing the horror and decay of Nurgle’s hordes. Speaking of Nurgle’s hordes, there are plenty of extras with this kit – 2 Nurgling Drones carrying phosphex bombs hang from the chains on Mortarion’s armour, with a further 3 on the base: 1 carries a Chaos icon, one waves a censer and one carries a tank of unmentionably horrid substances. The base itself is detailed with rocks which themselves are being corrupted by the foul presence of the Daemon Primarch.

Mortarion, Daemon Primarch of Nurgle comes as 78 components, and is supplied with a Citadel 100mm Round base.